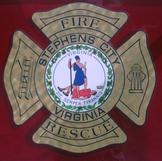 Thank you for your interest in applying for our Honorary Fire Chief Pageant!  Below you will get some information about the requirements and expectations.  A link to download an application is at the bottom of the page.

Note: The company will provide an escort for the honorary fire chief for the in-town contest and further information on all of the above-mentioned events will be given to the winner when details become available.

If you should have any questions, please call me in the evenings or email me anytime.

Best of luck to all applicants,